This Slow Cooker Creamy Cauliflower and Potato Soup sounds warm and comforting for an easy dinner and Karen says her kids gobbled this up despite the addition of cauliflower. 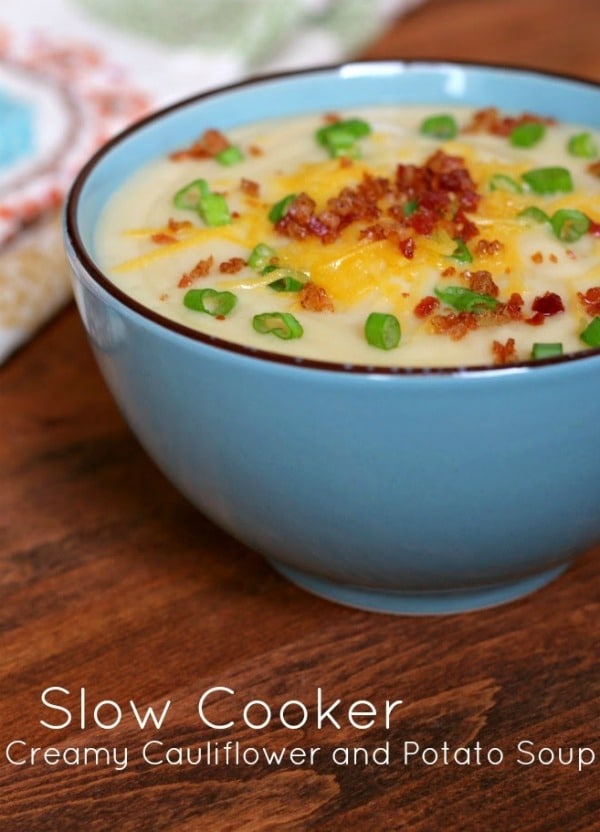 When I was a girl, my mom made potato soup with cheese and bacon sprinkled on top, and it was one of my favorite winter comfort food dinners as a child. Fast forward quite a few years, and now I wouldn’t want a soup with that many potatoes, but this Slow Cooker Creamy Cauliflower and Potato Soup from 365 Days of Slow Cooking sounds like the perfect combination of creamy potatoes and healthy cauliflower. And Karen says her kids gobbled up this soup when they got home from school on the day she tested the recipe.

This potato and cauliflower soup is a lightened up version of Karen’s Slow Cooker Copycat Cafe Zupas Wisconsin Cauliflower Soup that’s been such a bit hit on the site, and combining cauliflower and potatoes makes the soup creamy without so much butter and cheese. Personally I’d love to come home to this on a chilly day!

Get complete instructions for Slow Cooker Creamy Cauliflower and Potato Soup from 365 Days of Slow Cooking.

Recommended Slow Cooker Size:
Karen recommends a 3 to 4 Quart Slow Cooker for this recipe, but if you only have a larger size, I’d just double the recipe and you’ll have some for lunch the next day.

More Ideas for Soup in the CrockPot or Instant Pot:
Check out the Index Page for Soup or Stew to see all the Slow Cooker or Pressure Cooker Soup Recipes that have been featured on this site.