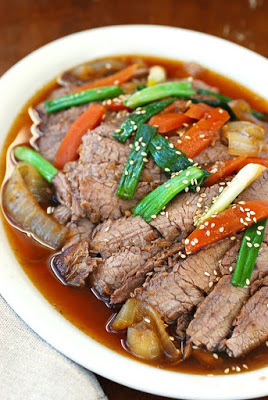 I have to admit I’ve never had the Korean dish called Bulgogi, but I do know it usually means thinly sliced marinated and grilled meat. But for this recipe for Slow Cooker Beef Bulgogi from Korean Bapsang, Korean food blogger Hyosun Ro uses the slow cooker to tenderize flank steak as it cooks with Korean flavors, and then slices it when the meat is tender.

Hyosun started her blog as a way to teach her kids the Korean recipes they grew up with, so I love knowing that even though Bulgogi in the slow cooker might not be traditional, it still has authentic Korean flavors. And I love the sound of this Korean Beef Bulgogi served over rice for a family dinner; hope you enjoy! And I’m guessing you could reduce the carbs here if desired by substituting other sweeteners and serving over cauliflower rice.