You’ll love this warm and comforting Slow Cooker Potato Soup, just like mother used to make! And I bet this would be a popular idea for family dinner! 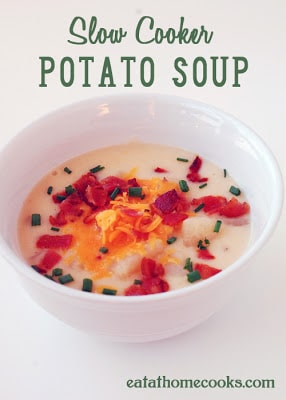 If I was allowed to change the recipe title for this Slow Cooker Potato Soup from Eat at Home, I’d rename it “Potato Soup Like My Mother Used to Make.”  I grew up on this kind of tasty soup that starts with real potatoes, and gets topped with a little bit of bacon and cheese.

You can also omit the bacon and use vegetable stock if you prefer and make this Slow Cooker Potato Soup into a Meatless Monday soup.  Sounds delicious either way to me!

Get the complete recipe for Slow Cooker Potato Soup from Eat at Home.

Still Hungry?
Use the Index Page for Soups or Stews to see all the slow cooker or pressure cooker soup recipes that have been featured on this site.