Slow Cooker Smothered Chicken Burritos are a delicious way to make a Mexican chicken dinner that simmers all day in the slow cooker. 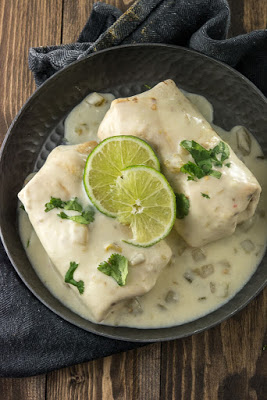 These Slow Cooker Smothered Chicken Burritos from Slow Cooker Gourmet start out in the slow cooker by combining boneless, skinless chicken breast with a few simple ingredients including fire roasted tomatoes and chopped green chiles. After it cooks all day you simply shred the chicken and it’s ready to go.

This is a great base recipe that gives you options for several dinners during the week. I’m thinking of tacos, enchiladas, or on a salad. And if by chance you had leftovers, they could easily be frozen for use at a later time.

Jennifer filled burrito sized tortillas and baked them just long enough to get them crispy. While they were baking she made a homemade cheese sauce to top them with. Sounds like a winning combination to me. Slow cooker smothered chicken burrito anyone?

More Ideas for Chicken in the CrockPot:
Use the Photo Index Page for Chicken to see all the recipes using chicken that have been featured on this site.