These Slow Cooker and Instant Pot Zucchini Recipes can help you use zucchini in a slow cooker or Instant Pot dish; this post has great ideas whenever you have a surplus of zucchini!

It won’t be long until some of you have a huge surplus of zucchini, and that’s when this collection of Slow Cooker and Instant Pot Zucchini Recipes can help you with ideas for using zucchini. That abundance of zucchini can get overwhelming, which is why there’s Sneak Some Zucchini onto Your Neighbor’s Porch Day, and why I have a collection with 50 Amazing Zucchini Recipes on Kalyn’s Kitchen.

This collection has slow cooker zucchini recipes and ideas for Zucchini in the Instant Pot. We’re featuring 16 tasty-looking recipes with photos including soups, stews, veggie bowls, pasta dishes, and main dishes with zucchini.

And you can never have too many zucchini recipes, right? We just kept finding good options for this post, but we know you don’t want to scroll past too many photos, so be sure to check the list after the photos to see all lots more great recipes with zucchini that we discovered. And enjoy!

All photos are copyrighted to the blog that’s linked under the photo; just click on the recipe title to see the full recipe on that blog. 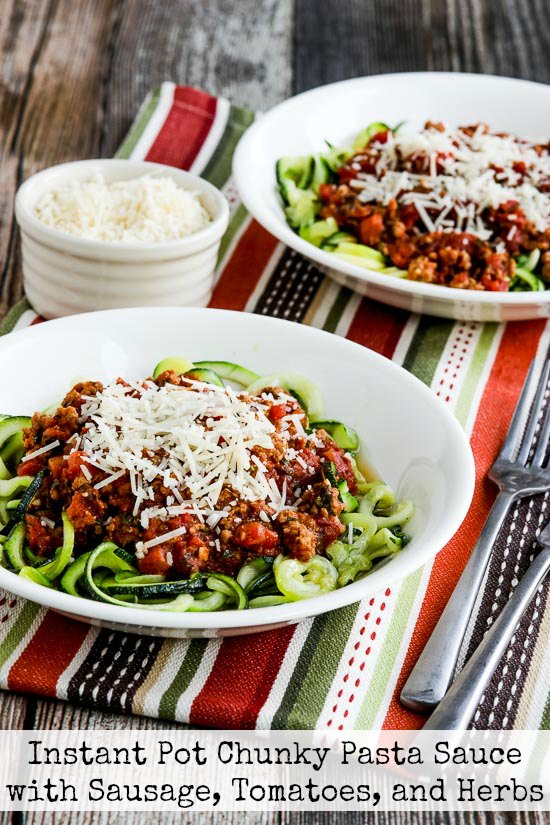 Instant Pot Pasta Sauce with Sausage, Tomatoes, and Herbs from Kalyn’s Kitchen is a delicious low-carb sauce to serve over zucchini noodles, and this recipe includes how to make and cook the zucchini noodles. 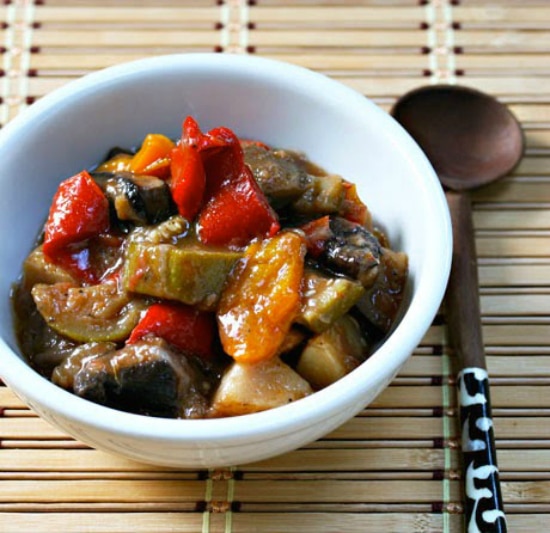 Ratatouille is one of the most famous summer dishes using zucchini, and this Slow Cooker Ratatouille from The Perfect Pantry can show you how to make this classic dish even easier. 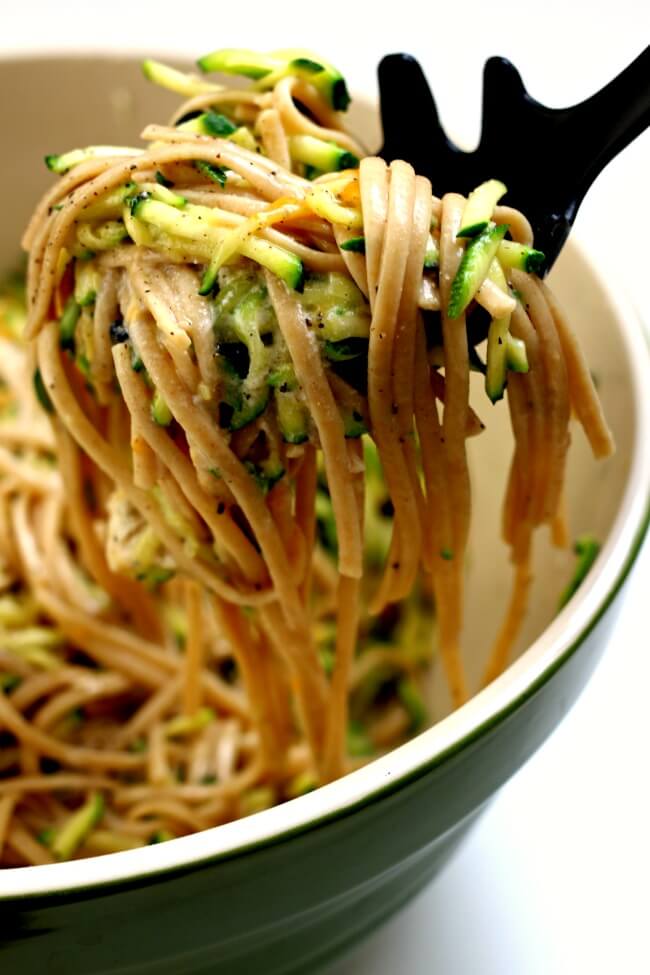 Instant Pot Zucchini Linguine from 365 Days of Slow + Pressure Cooking cooks the chicken and linguine in the Instant Pot, then the shredded zucchini, garlic, and cheese are added to finish the dish. 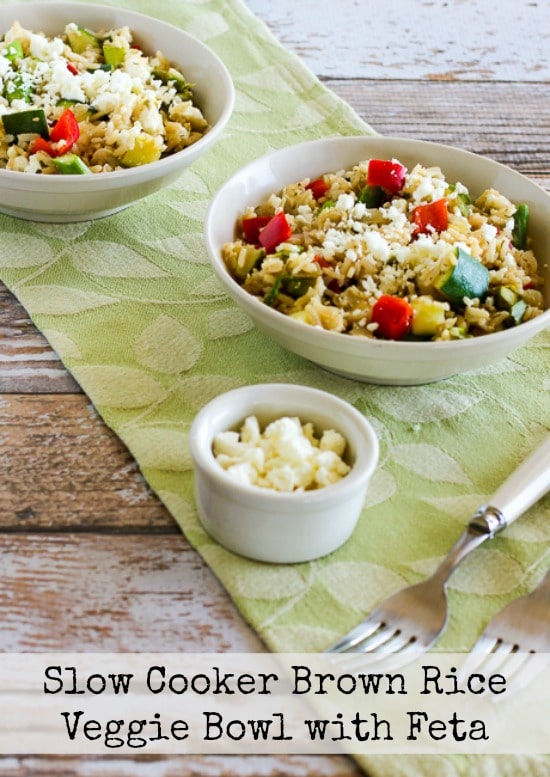 Slow Cooker Brown Rice Veggie Bowl with Feta from Kalyn’s Kitchen uses asparagus, zucchini, and peppers with those Greek flavors so many people love. And if you have a lot of zucchini to use up you can skip the asparagus and use more zucchini in this recipe. 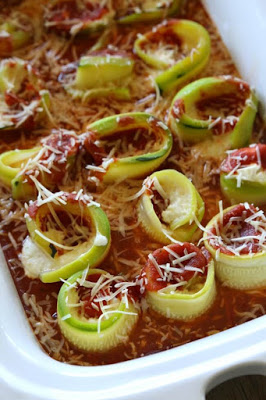 I love the idea of letting rolled up pieces of noodles replace the lasagna noodles in this Slow Cooker Zucchini Lasagna Roll-Ups (low-carb) from 365 Days of Slow Cooking, and this sounds delicious! 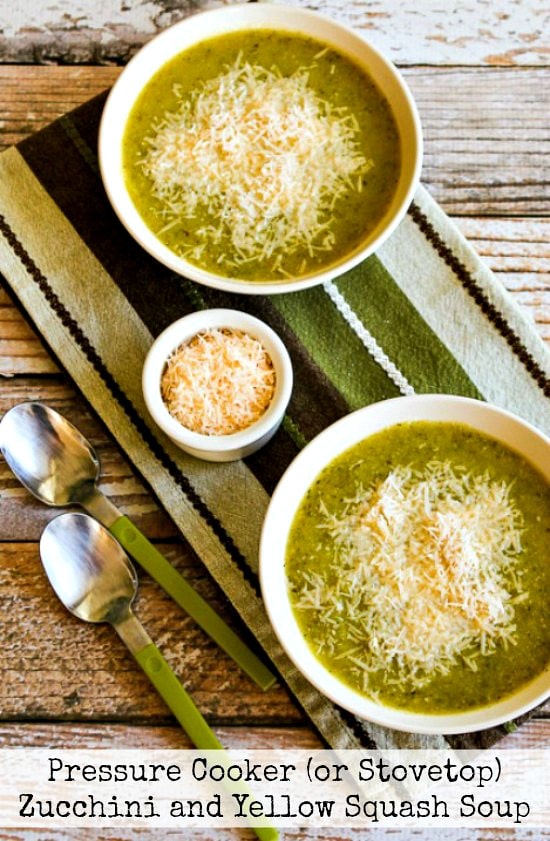 Zucchini and Yellow Squash Soup with Rosemary and Parmesan from Kalyn’s Kitchen can be made in the Instant Pot or another Pressure Cooker, or on the stove, and this is a delicious low-carb soup! 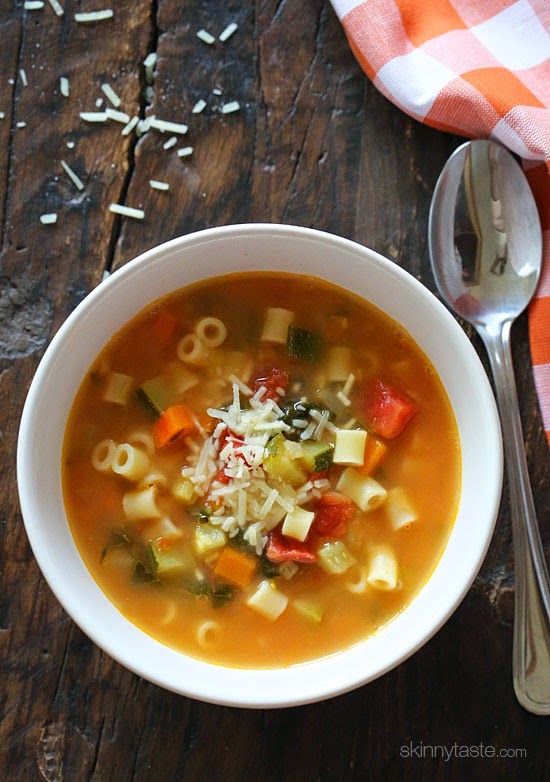 Zucchini is an essential ingredient in Minestrone soup, and this Crock Pot Minestrone Soup from Skinnytaste sounds just perfect. 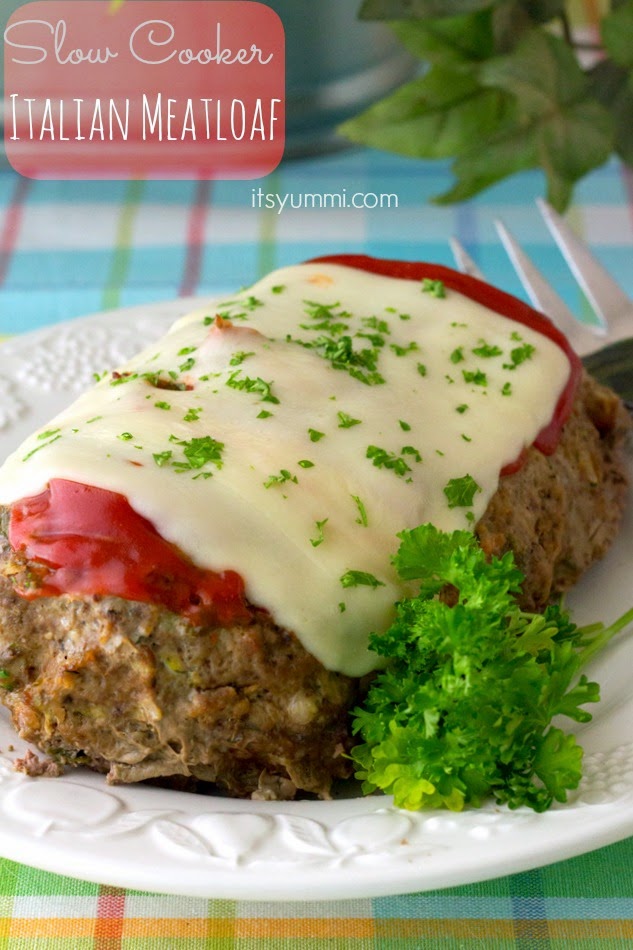 Slow Cooker Low-Carb Italian Meatloaf with Zucchini (low-carb) from It’s Yummi uses grated zucchini to bind the meatloaf together, and this is a super popular recipe! 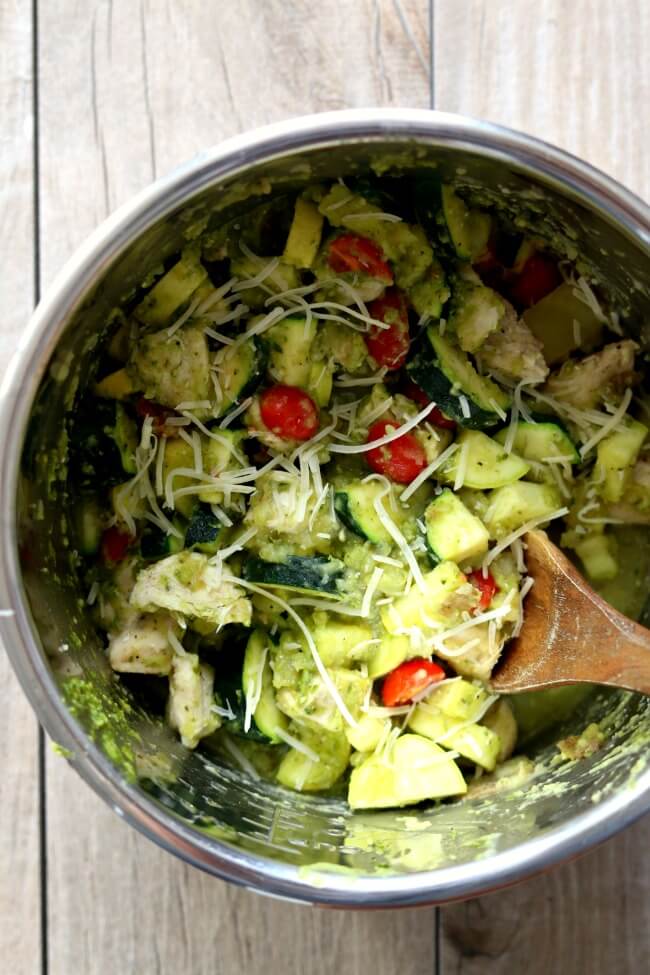 I think Instant Pot Chicken Pesto and Vegetables from 365 Days of Slow + Pressure Cooking sounds perfect for a summer dish, and Karen also has a slow cooker recipe for this! 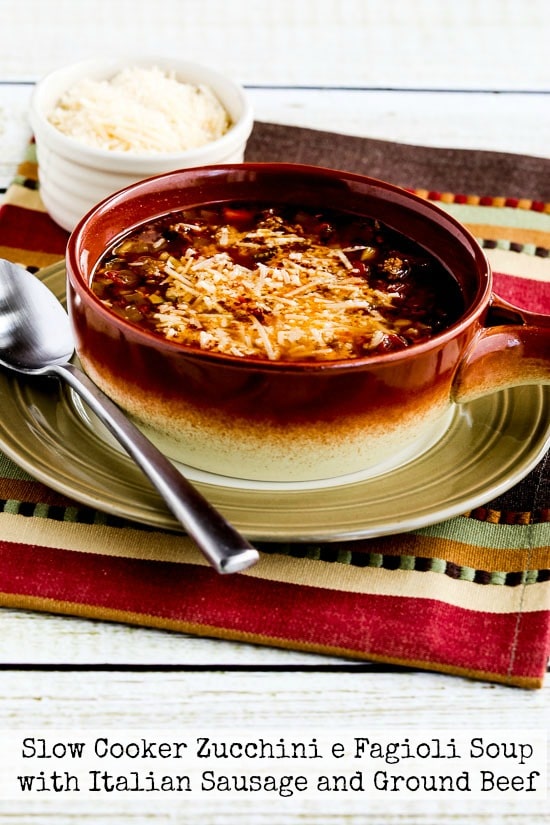 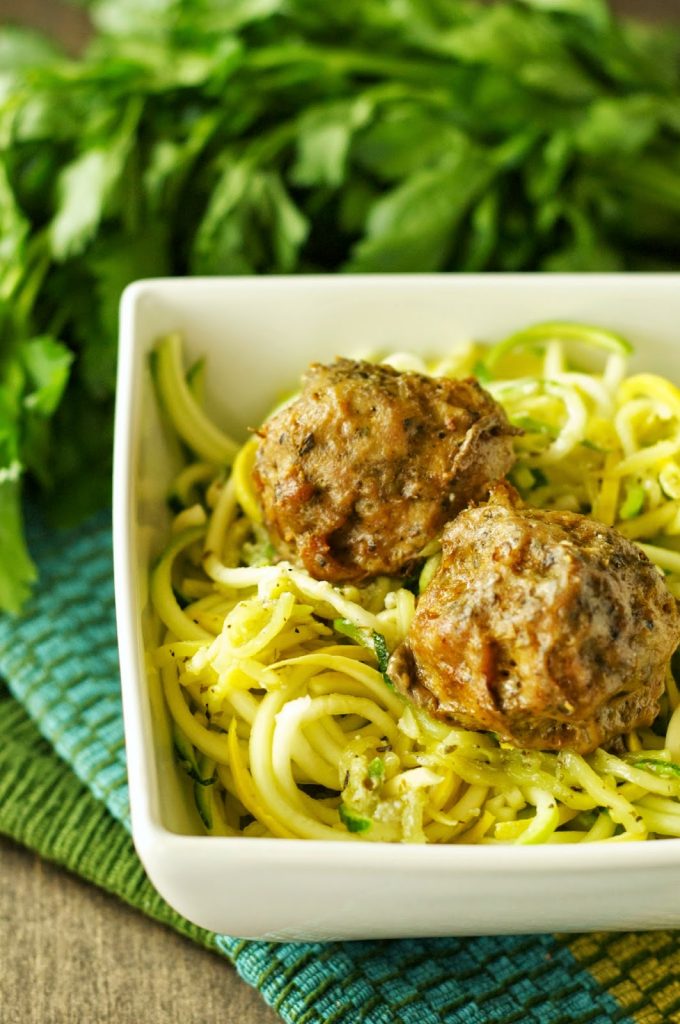 Don’t you love the sound of  Crockpot Herbed Turkey Meatballs with Zucchini, Ricotta, and Pesto from Slow Cooker Gourmet! 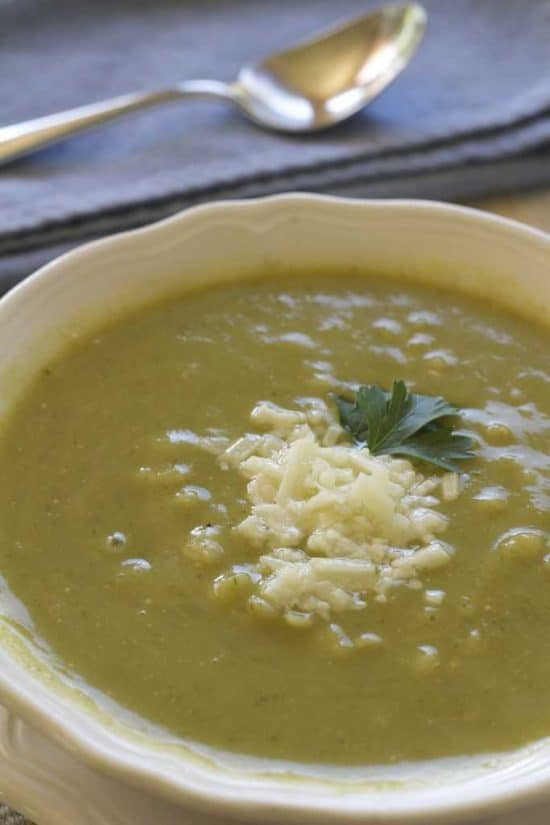 I love the spicy chiles in this vegetarian Easy Spicy Zucchini Rice Soup from Letty’s Kitchen that’s made in the Instant Pot. 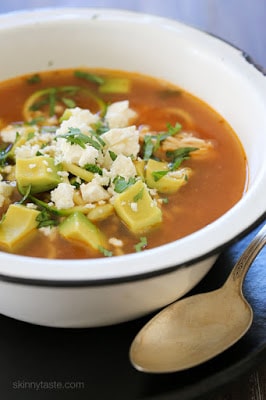 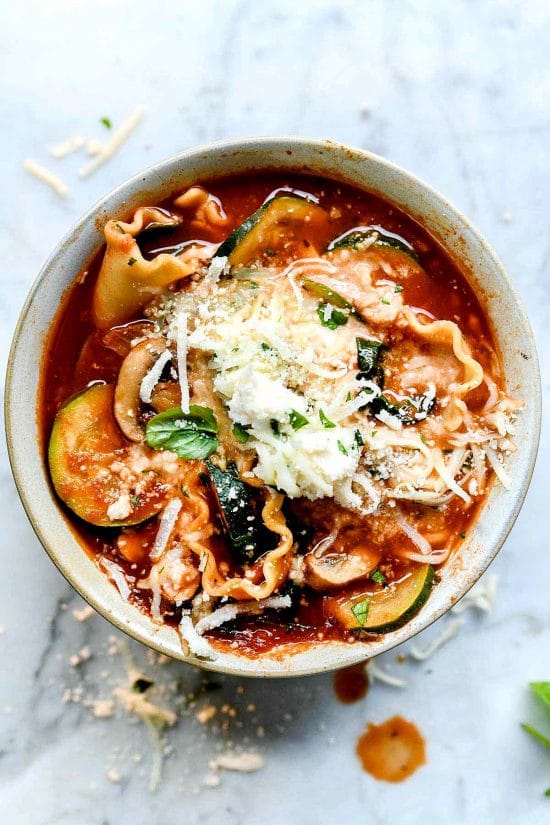 Vegetarian CrockPot Lasagna Soup From Foodie Crush has been really popular on the site, and who doesn’t love Lasagna Soup? 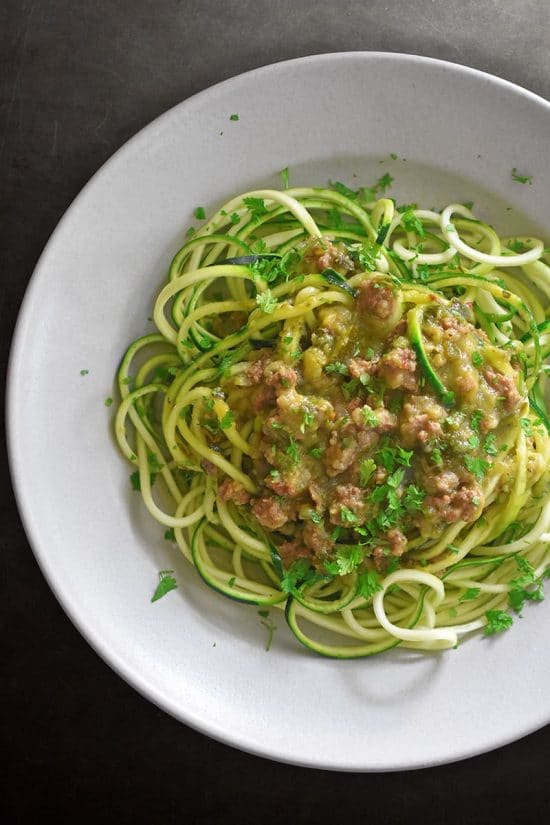 More Zucchini Recipes for the Slow Cooker or Instant Pot:

If you’ve used zucchini in a slow cooker or Instant Pot recipe, tell us in the comments about what you did!