Here are Slow Cooker or Instant Pot Greek Tacos for a tasty taco dinner with those Greek flavors so many people love! Whether you use pork, lamb, beef, or chicken, just season the meat with garlic, lemon, and Greek spices to get amazing Greek flavors.

PIN the Greek Tacos to try some later! 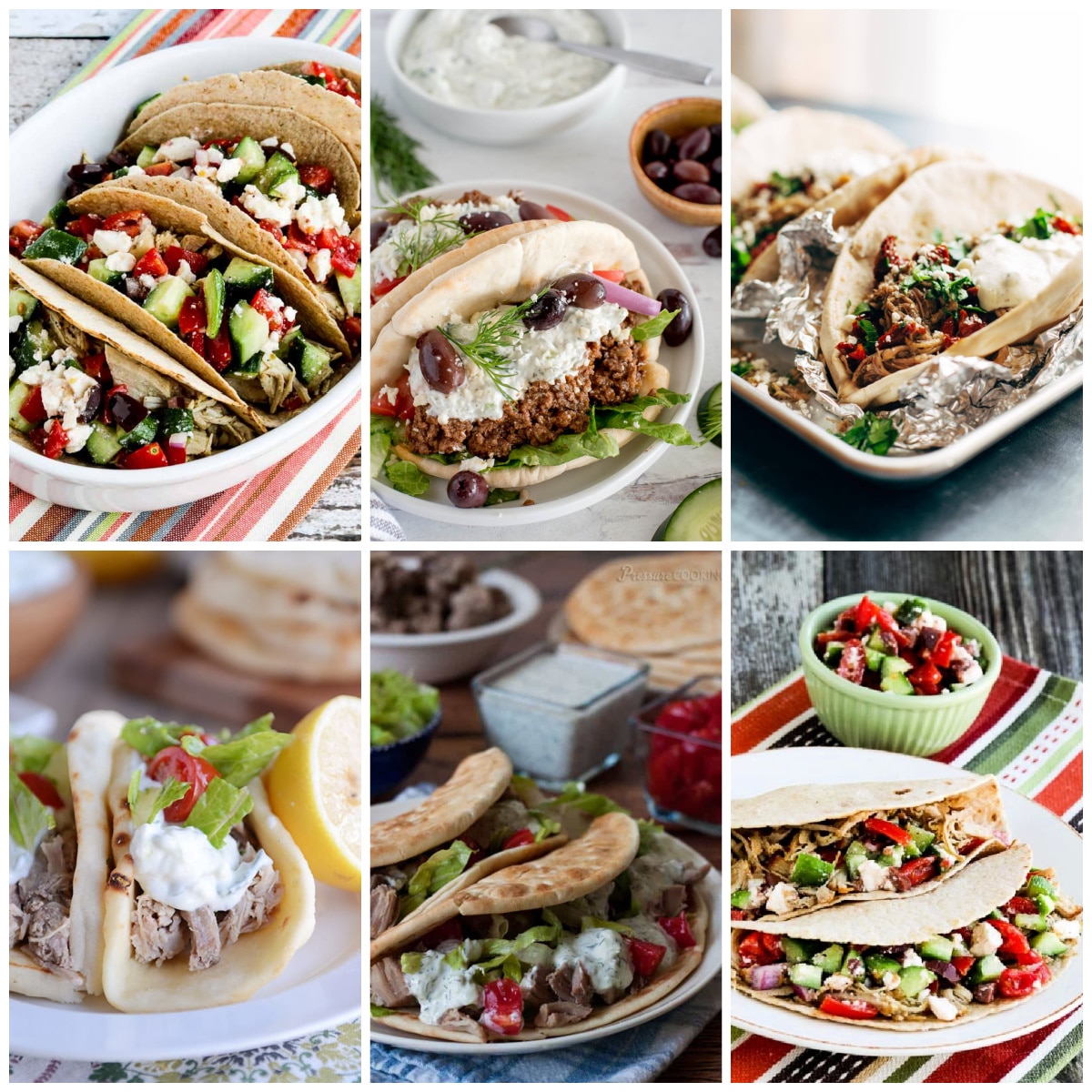 This post has a variety of dishes that I’m calling Greek tacos, and I hope it won’t upset people that I’m using that name! Of course Tacos are not really found in Greece, but these Slow Cooker or Instant Pot Greek Tacos are a fusion dish featuring meat that’s cooked with Greek flavors and then served inside tortillas or pita bread with toppings to create something that’s eaten like a taco!

And I love Greek food, so I think these all sound amazing, no matter what you decide to call them. In the tasty Greek Taco variations, pork, lamb, beef, or chicken cooks in the Instant Pot or slow cooker until it’s fall-apart tender, and then the meat is served in tortillas or pitas with ingredients like Greek yogurt, cucumbers, spinach, olives, and Feta cheese served as toppings. Don’t you think that sounds like a tasty dinner idea?

How can you get the complete recipe?

Just click any recipe name to see the complete recipe on that site. All photos are copyrighted to the site that posted the recipe.

Can these recipes be made into a low-carb meal?

If you serve them with low-carb tortillas, with low-carb pita bread, or in lettuce wraps, most of these delicious Greek Tacos can be a low-carb meal. 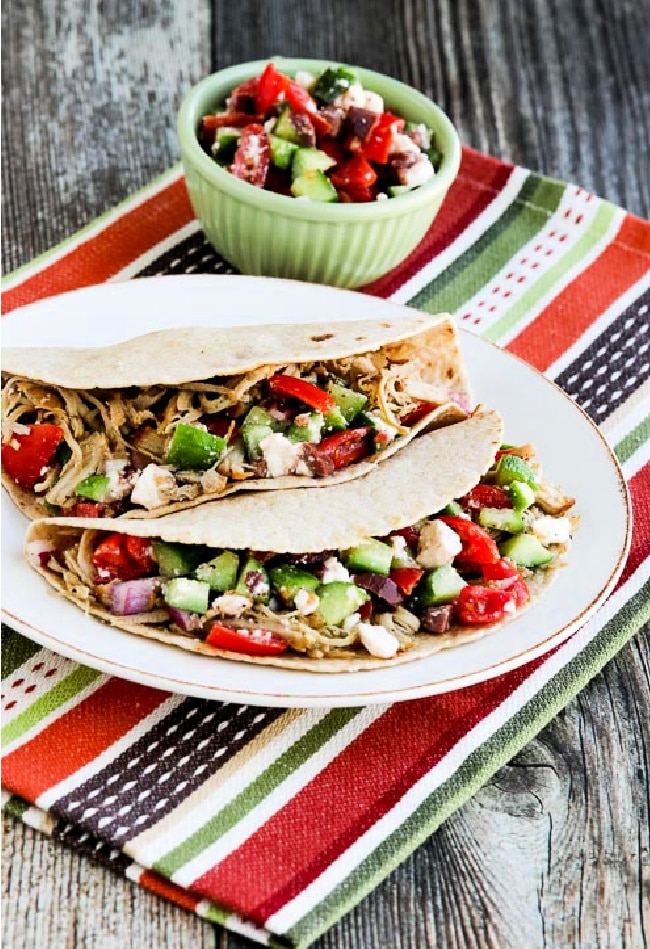 Low-Carb Greek Pork Tacos from Kalyn’s Kitchen are made with lemony Greek pork that is tender, shredded, and served in low-carb tortillas with Greek Salsa. This can be cooked in the Instant Pot or the Slow Cooker, and these tacos will be a hit with anyone who likes Greek flavors! 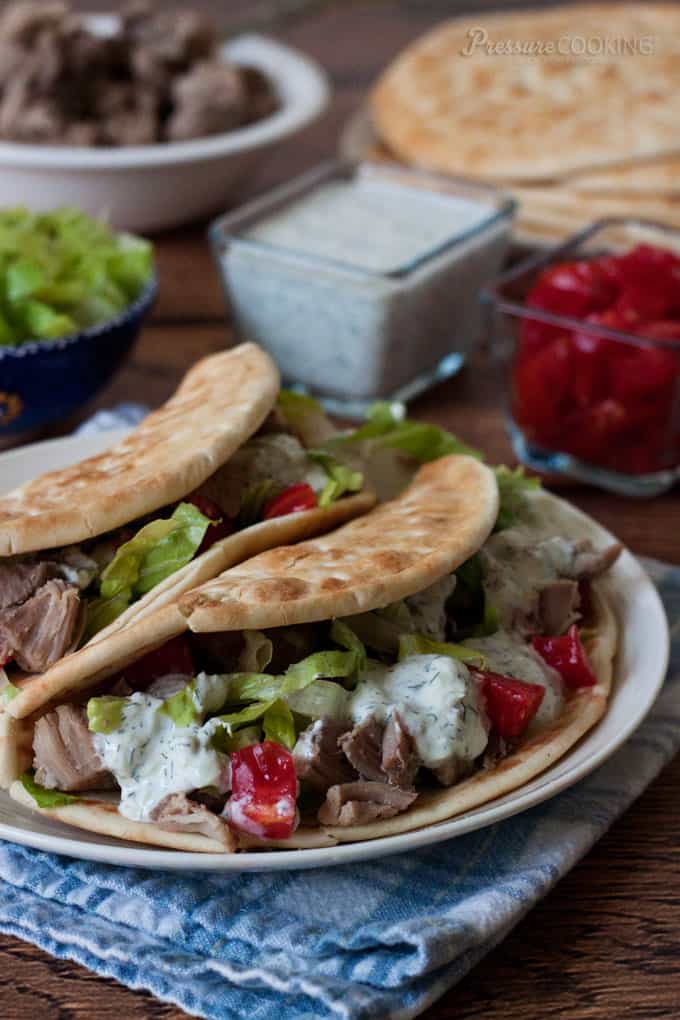 Pressure Cooker Greek Tacos from Pressure Cooking Today start with tender chunks of seasoned pork cooked with lemon juice and a few spices. The pork cooks for just 25 minutes in the pressure cooker and then is served on warm pita bread with lettuce, tomatoes, and Tzatziki sauce. 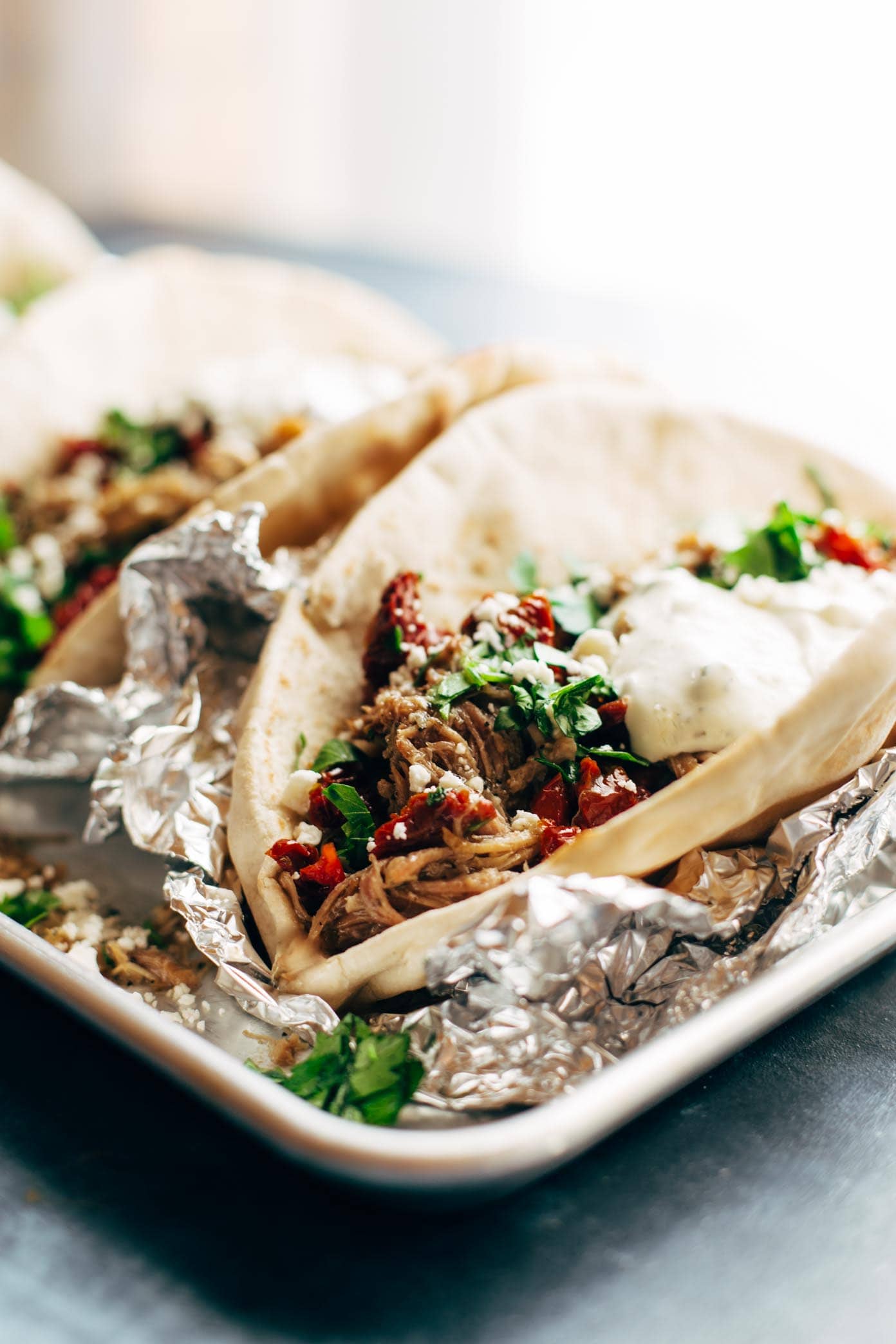 Everything Greek Pork Pitas from Pinch of Yum have delicious Greek pork cooked in the Instant Pot and served in pita with Tzatziki and other toppings of your choice like lettuce, tomatoes, red onion, feta, and lemon! 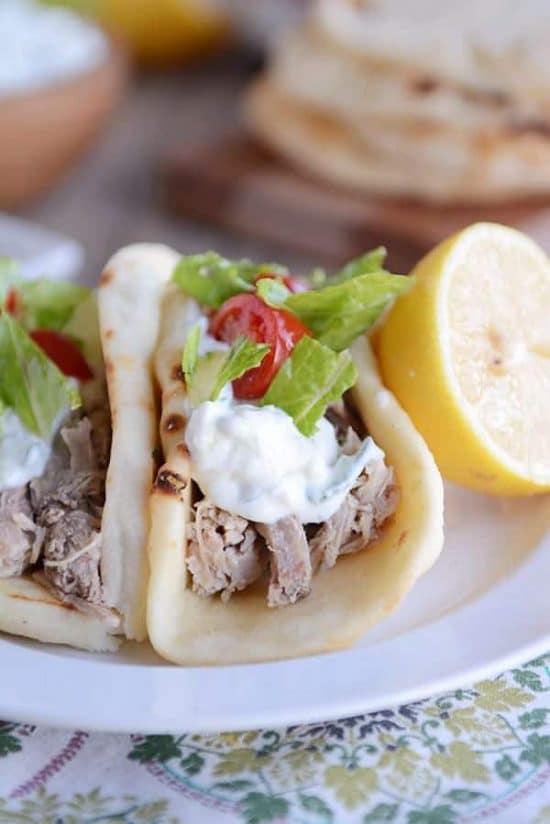 Tender Greek Pork from Mel’s Kitchen Cafe cooks in the Instant Pot or the slow cooker until it’s fall-apart tender and Mel says “it’s fantastic served in soft flatbread with tzatziki sauce (equally delicious over a salad or rice!” 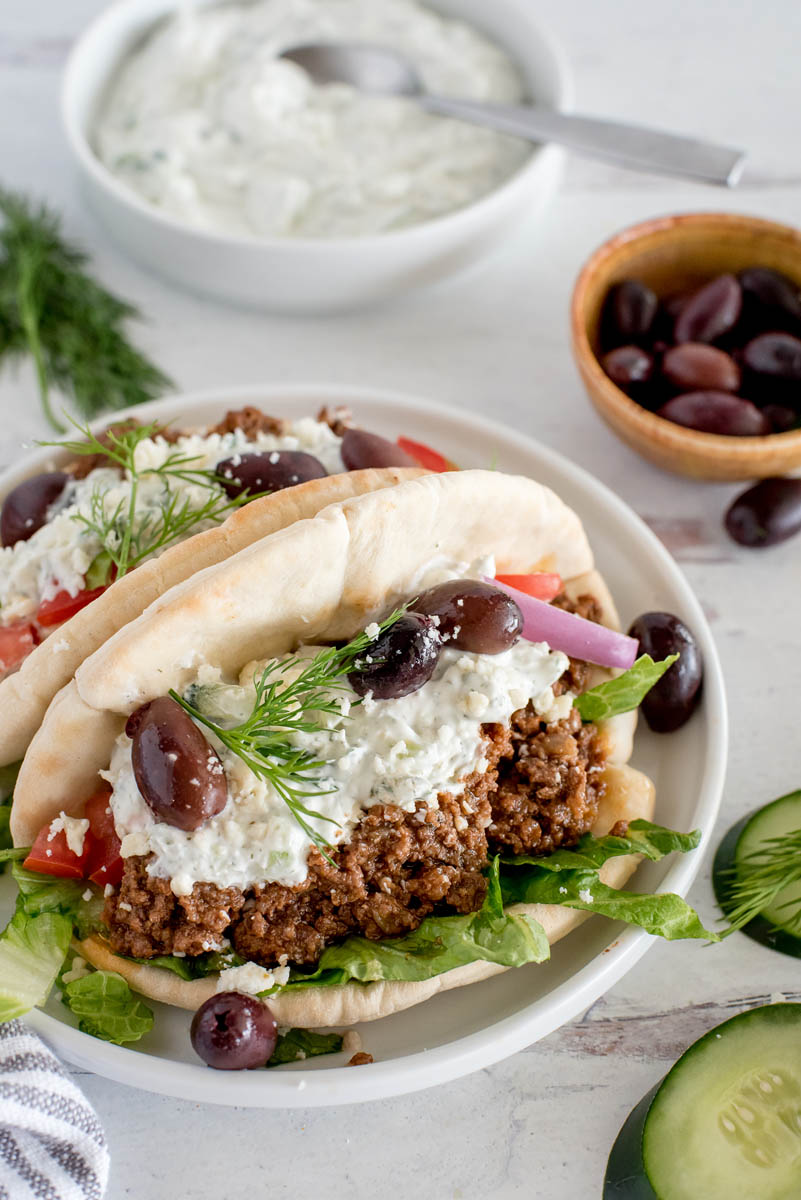 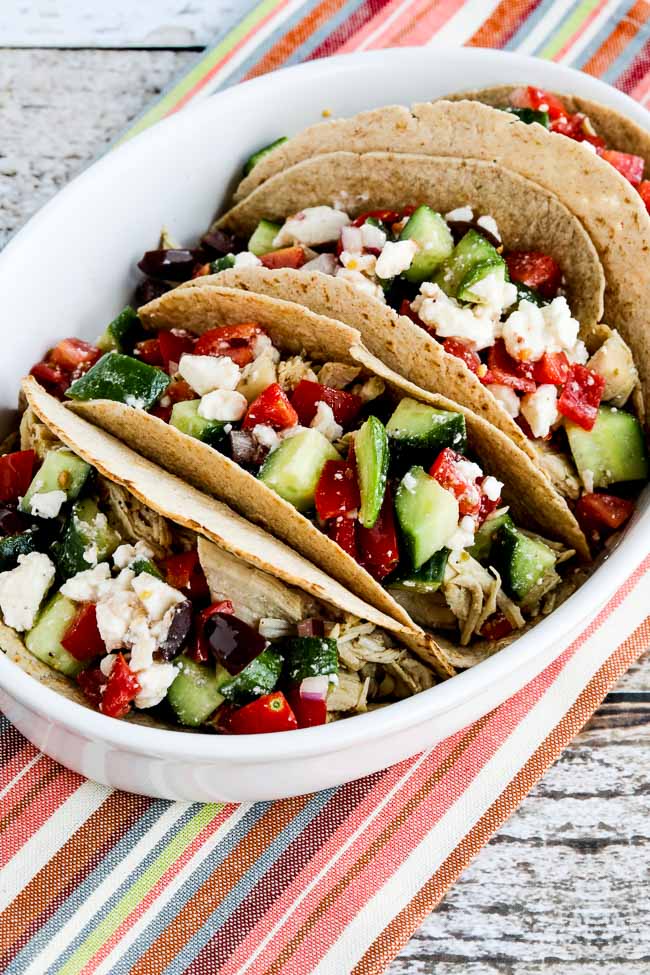 Instant Pot Greek Chicken Tacos from Kalyn’s Kitchen have chicken that’s cooked in the Instant Pot with lemon, olive oil, chicken stock, and Greek oregano, and then it’s shredded and served in low-carb tortillas with an amazing Greek salsa. 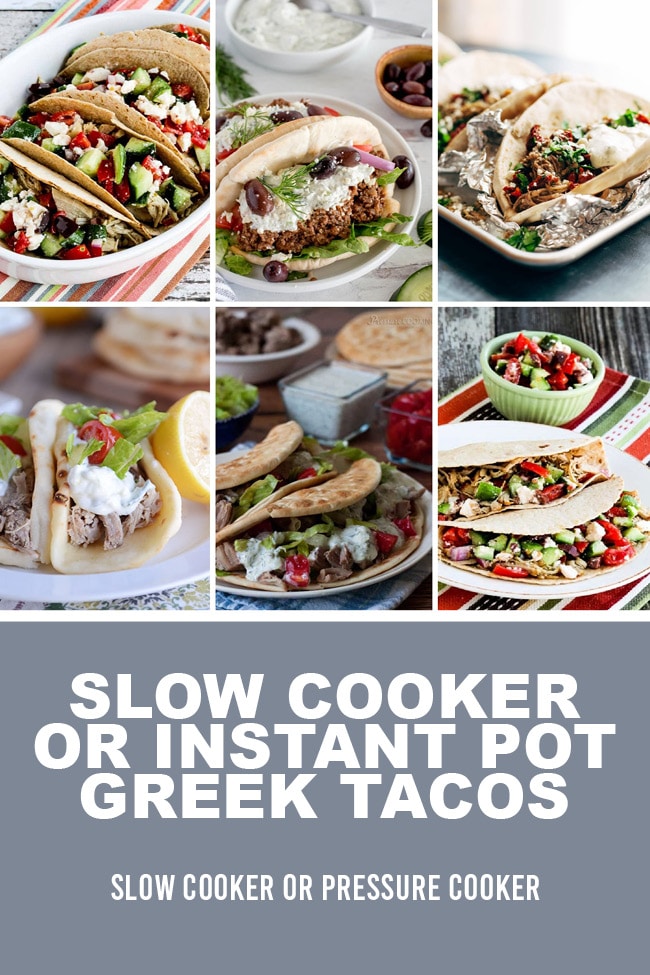