This round-up has Slow Cooker or Instant Pot Fajitas from Food Bloggers, and Fajitas are always perfect for a family dinner! And Fajitas are an easy dinner to skip the tortillas for family members who are watching their carbs. 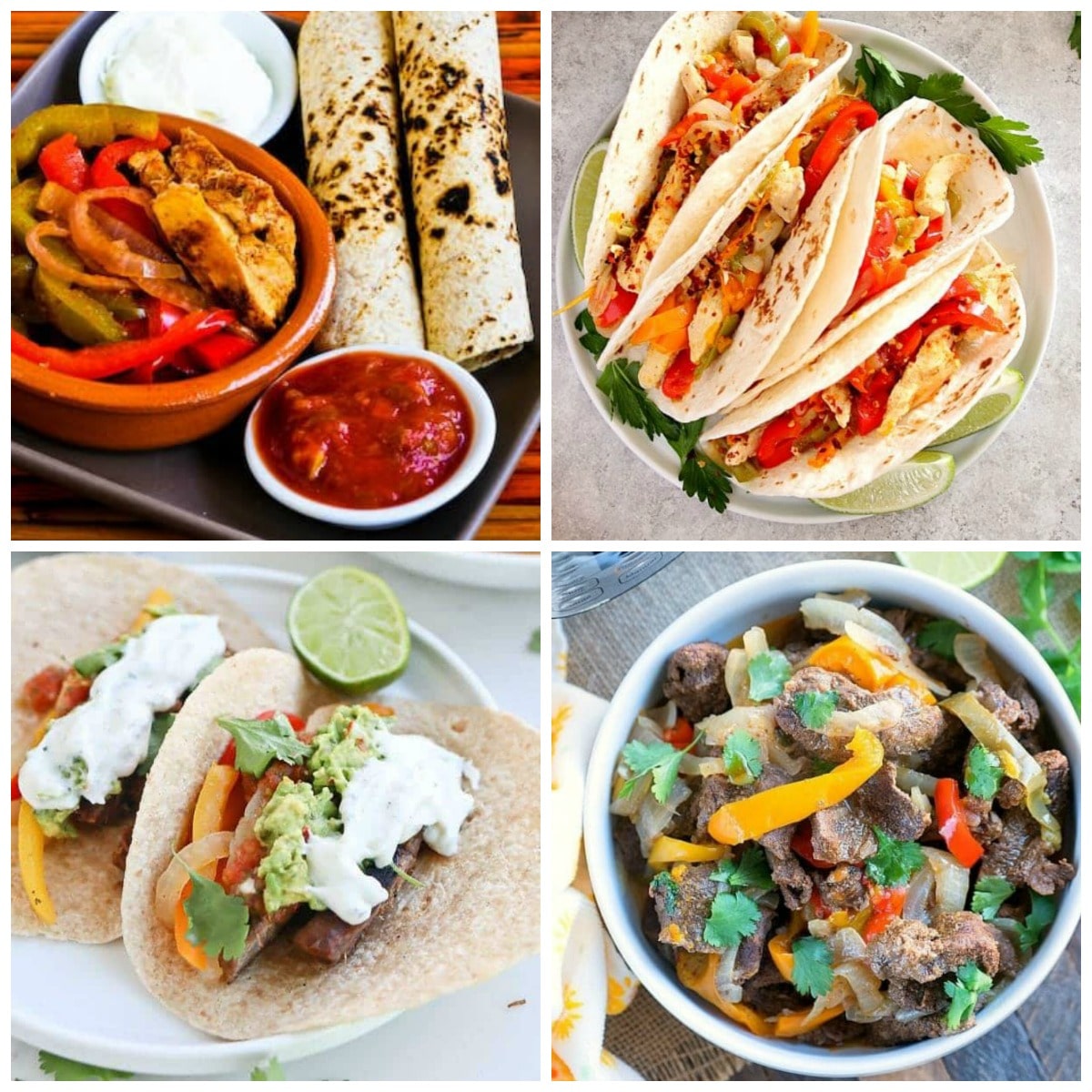 And fajitas are so versatile for a dinner idea! Whether you combine beef and veggies, chicken and veggies, or just plain veggies you’ll have a dish that’s perfect for a weeknight dinner. If you have low-carb eaters in the family you can offer them low-carb tortillas or lettuce wraps, or just serve the meat and veggies on a plate with melted cheese, sour cream, or avocado! Other family members can eat their dinner with regular tortillas and everyone will be happy!

All photos are copyrighted to the blog that originally posted the recipe. Just click the recipe title under each photo to see that recipe on the original blog. And then be sure to scroll down past the photos for 10+ more options for fajitas in the slow cooker or Instant Pot! 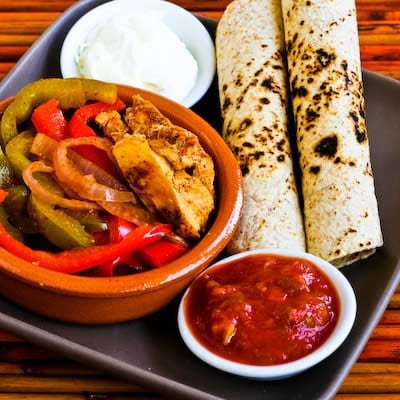 Slow Cooker Chicken Fajitas from Kalyn’s Kitchen are a favorite recipe I’ve been making for years, and when I’m being strict on carbs I love to eat the chicken and veggies with melted cheese and skip the tortillas! 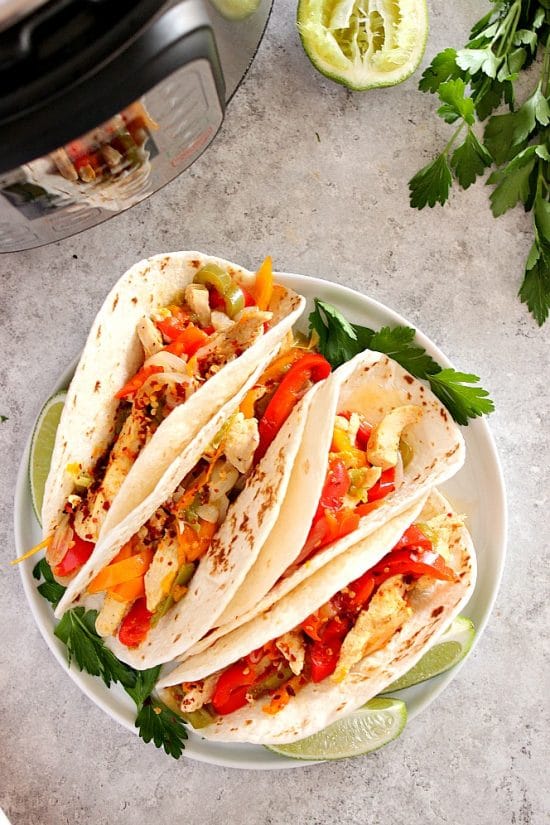 Instant Pot Chicken Fajitas from Crunchy Creamy Sweet look and sound delicious, and Anna says you can even start this recipe with frozen chicken if you forget to thaw! 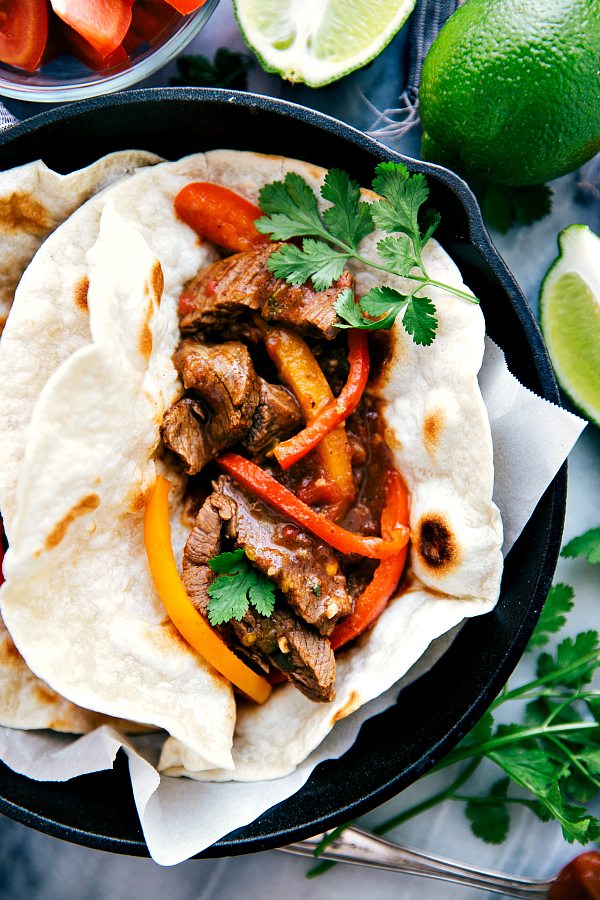 CrockPot Steak Fajitas from Chelsea’s Messy Apron look amazing, and Chelsea says she experimented with this recipe a few times to get the timing just right. 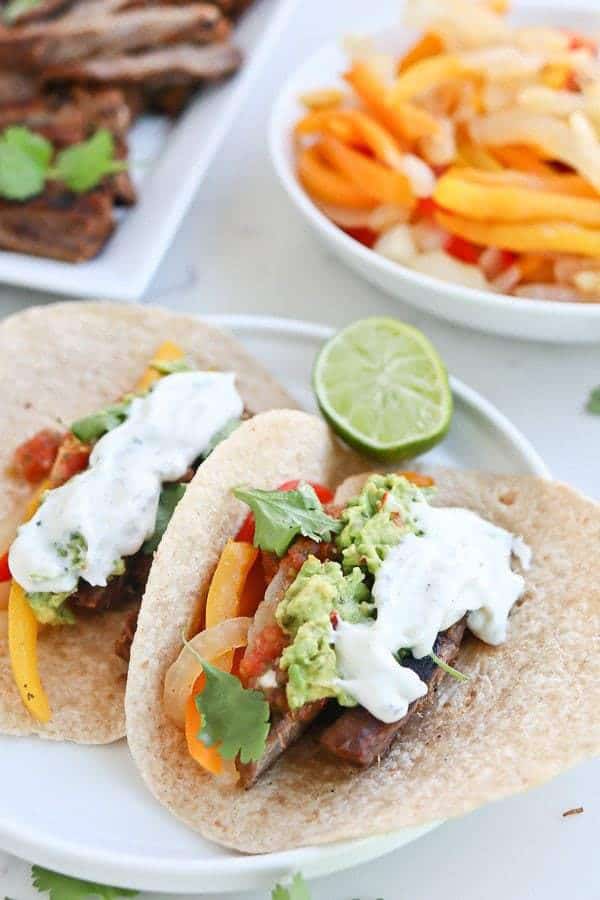 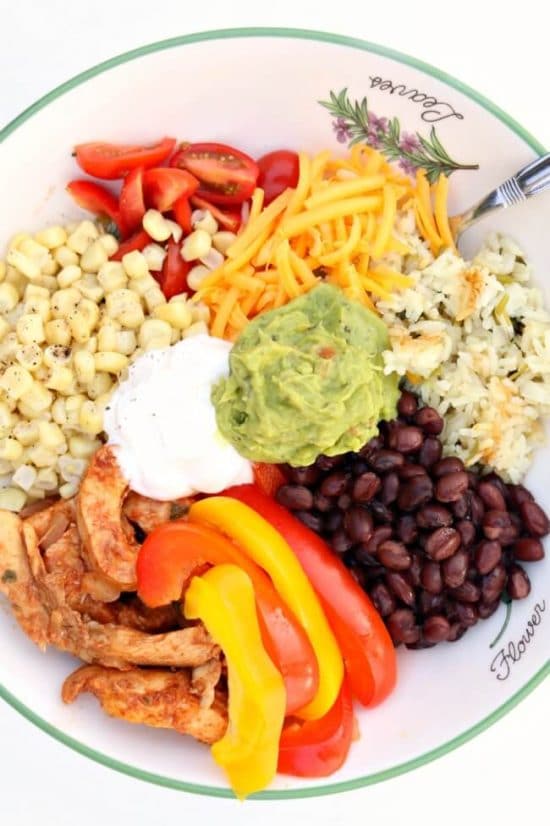 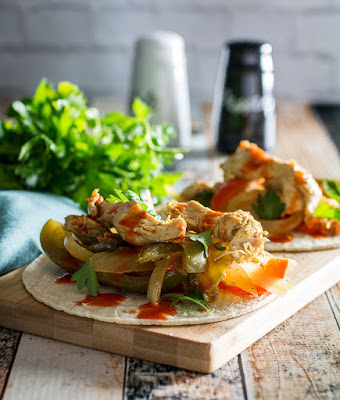 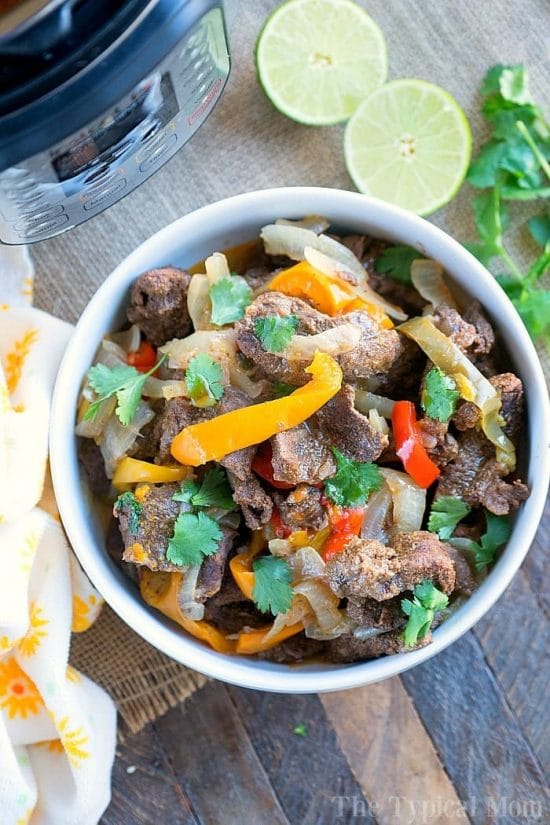 Instant Pot Fajitas from The Typical Mom offers a homemade marinade for the steak but Justine says you can also use a packet of fajita seasoning if you prefer. 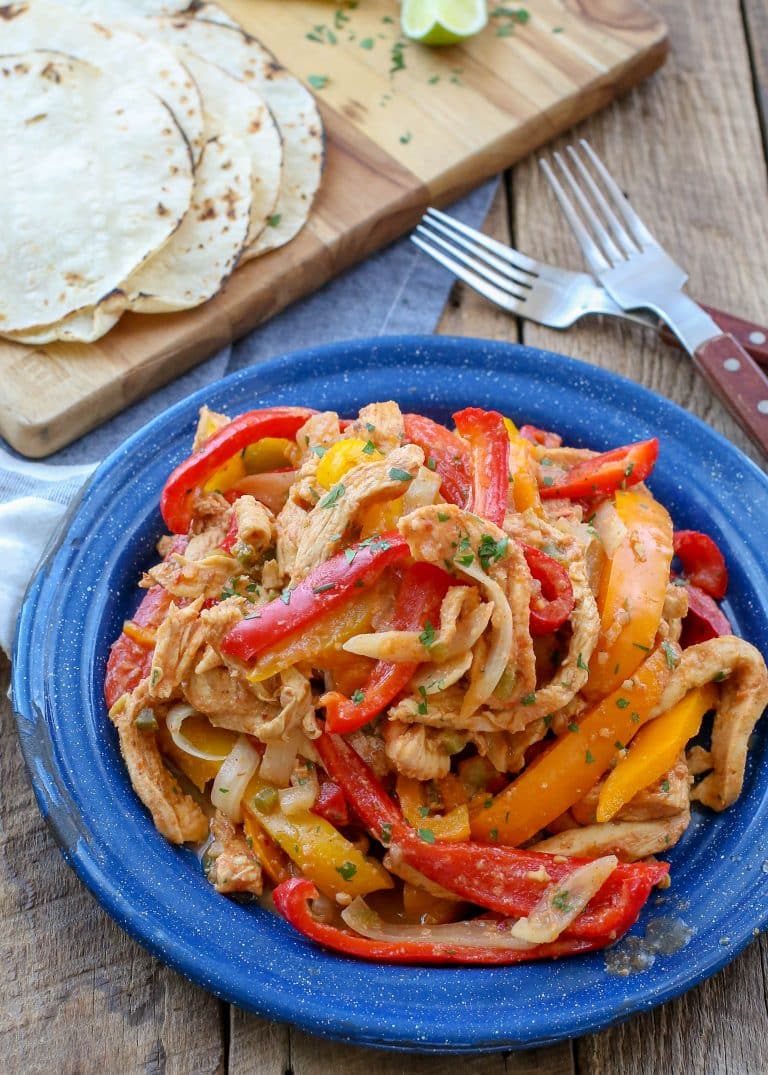 CrockPot Chicken Fajitas from Barefeet in the Kitchen are delicious served in tortillas as shown, but Mary says she loves to serve this over rice for a rice bowl meal as well. 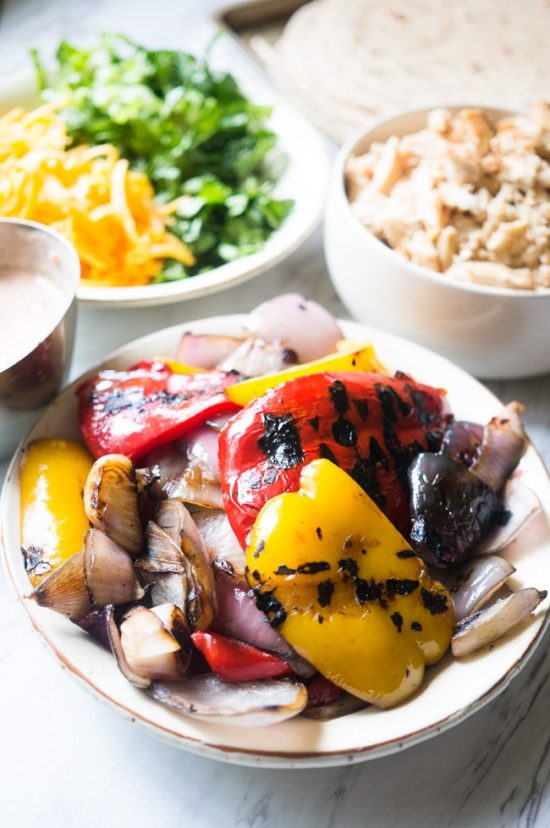 Don’t you love the sound of charred peppers in these Pressure Cooker Chicken Fajitas with Charred Peppers from Kitschen Cat! 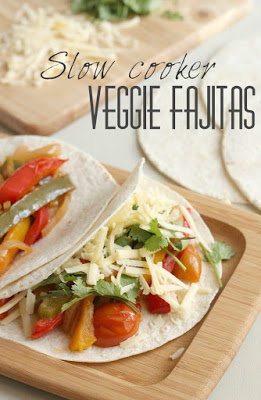 Slow Cooker Veggie Fajitas from Easy Cheesy Vegetarian will be. a tasty option for anyone who’s limiting or avoiding meat!

More Fajitas in the Slow Cooker:

More Fajitas in the Instant Pot:

Have you made Fajitas in the Slow Cooker or Instant Pot? Tell us about it in the comments! 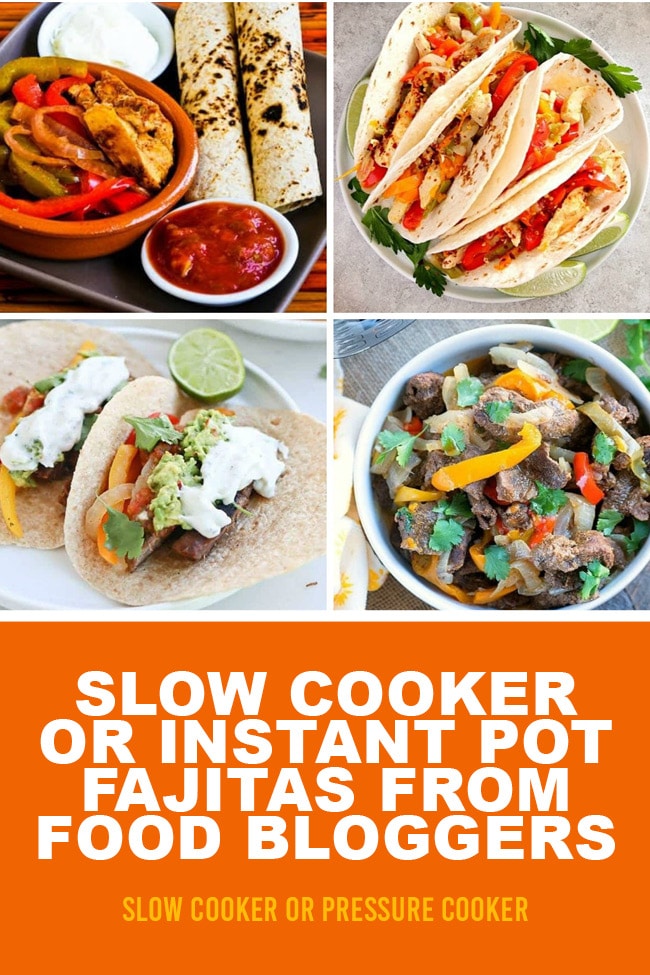